One legacy of the long Portuguese rule in Goa, which is still in effect today, is the magnificent architecture of the heritage houses and churches in the state. Goa is probably the only state in the country that still has houses that belong to the 1700’s and are owned by the generations of original owners.

Unlike the other rulers in India, the Portuguese have managed to leave a much bigger mark on the architecture of the country. The residential houses built during the Portuguese era are designed in such a style that is hardly found anywhere else in the subcontinent. These European style houses are still kept in pristine condition but mostly found in the rural parts of Goa such as Loutolim and Chandor. Even the commercial town of Margao has some fabulously maintained houses from the 18th Century in the Borda area. The materials and techniques used for constructing the houses were probably local while the decorations and furnishings were imported from different parts of the world. 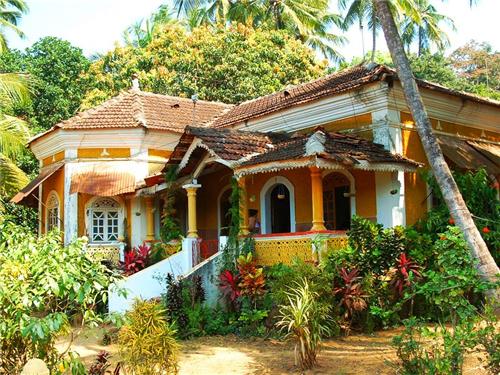 The exterior of a typical Portuguese house was built out of red laterite stones and wood with terracotta roof tiles imported from Mangalore. The Catholic houses during the 18th and 20th Century were more modern and outward looking with covered porches and verandas overlooking the street. The large balcões (porches) usually had built-in seating for two, where the owners could ‘be seen and see’ the people crossing the street or enjoying a cup of tea while chatting with the neighbors. The balcões were sometimes bounded by ornamental columns along with steps that led inside the house. It was considered that the grander the steps, the richer are the owner of the house.

Similar to the exterior, the interior of the house was also very striking, with some houses having their own dance rooms and mini-chapels. The dining and drawing rooms were usually very large and decorated with a wonderful collection of blue china ceramics and glassware along with mirrors from Venice, tapestries from Portugal and chandeliers from Belgium.

To visit these houses, one has to take special permission from the owners or the tourist office in Goa. One might even have to give a small donation for the upkeep of the house. Here are some popular Portuguese style mansions in Goa that are open to the public:

Salvador Costa Mansion
Located in Loutolim in South Goa, Salvador Costa Mansion was built during the 19th century by two wealthy priests – Padre Pedrinho and Laurence. The mansion is built in an Indian manner with low pitched roof and wide verandas, but with European appurtenances like Gothic style windows and cluster columns.

Solar Dos Colacos Mansion
Located near the famous River Mandovi, in-between Old Goa and Panjim, this mansion is built extravagantly with an impressive view of the islands and the beautiful churches of Goa. It is probably the only mansion in Goa overlooking the river.

Vivian Coutinho Mansion
Situated right at the entrance of Margao, in Fatorda, this mansion reveals the amount of care and planning that went into building it. The lush green garden greatly contrasts the red masonry seats on the balcões. It is probably the only Portuguese home in Goa that has decorative tiles on the outer wall along with red stones.

Palacio Do Deao
Built by a noble Portuguese man, who was the founder of Quepem Town and also the Dean of the Church, this 213 year old mansion has the unusual blend of Hindu and Portuguese architecture. Located on the banks of Kushavati River, the mansion consists of a verdant garden with beautiful historical features. 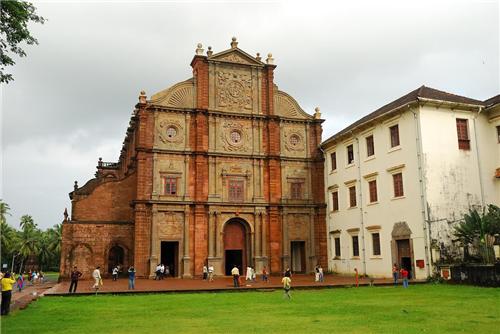