How Kaju Feni is Made

How Kaju Feni is Made

Goa can be quite the surprise when it comes to food and cuisines. The villages in Goa have been preserving some delicacies that are little known outside India. For tourists and those who relish a good meal, these delicacies can be an excellent reason to visit the state. The distinct taste of Goan cuisines probably stemmed from the centuries of Portuguese influence. Though the culture of Goa dates long before the Portuguese arrived, their influence cannot be separated. 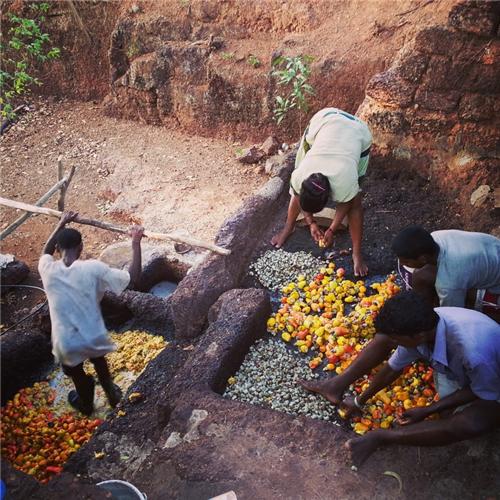 Feni is an alcoholic beverage that is univocally associated with Goa. It is endemic to the state of Goa and is brewed by the local communities in Goa. Feni uses two primary ingredients for the two varieties. These are coconut and cashew. Each of these is a major ingredient that is required in the respective preparations.

Locals would tell you that brewing the perfect pitcher of cashew feni is more of science. Each ingredient has to be put in at correct proportions. Even a slight deviation can lead to significant alterations in the taste and this is the reason why so much caution is exercised while brewing the drink. The first step that needs to be undertaken is the selection of fine cashew apples. The best apples for the drink are those that have ripened on the trees.

Deseeding follows and the entire batch of cashew apples is placed at a ‘colmbi’. This is where the smashing of the apples takes place. Stomping is carried out vigorously to extract the juices from the fruit. Subsequently, the juice is passed through a vine and stored in earthen pots created specifically for the process. The pots are stored in dug pits for upto three days at the end of which the fermentation process is completed. The fermentation product is called the ‘neero’. The beverage is then distilled using a traditional pot called a ‘bhatti’. Feni is the result of three stage distillation. ‘Neero’ is boiled in three separate stages. In each stage, the concentration of alcohol increases. The products of the separate stages are ‘urrak’, ‘cazulo’ and finally feni.

Modern day inventions have substituted several traditional apparatus that were used in the preparation of this drink. A cage like device called ‘pingre’ has largely taken over the task of squashing the cashew apples. In the early times, this process used to be done manually. Moreover, the earthen pot or ‘kodem’ that was used for the fermentation of the beverage have been replaced by plastic vessels that are easy to clean.

The production of this vintage Goan liquor is still largely unorganized and most village households produce it in their backyards. Based on the locality and the available properties of the raw materials, subtle variations may ensue in the final product. The drink contains 42% alcohol and is a staple in every leading festival. Some commercial feni have been marketed in recent years but still people prefer to brew the beverage locally. At times, natural flavors may be added to add a tinge to the taste.