Goa Forts are smaller in size compared to other forts in the country. However, these forts are the direct result of the fascinating culture and architecture of Goa. They are the historic epitome of huge political, economic and military importance. With several rulers, the forts in Goa are the example and witnesses of a long-gone era. Here are some of the famous forts in Goa:

Located on the Sinquerim Beach, Fort Aguada and its famous lighthouse is a seventeen century Portuguese Fort facing the Arabian Sea. Built in 1613, the main purpose of this fort was to protect the Portuguese against the Marathas and the Dutch. It served as the main vessel point for the ships arriving from Europe. Given that Aguada literally means water, there is a small spring inside the fort that used to provide fresh water to the ships stopping by the fort. The entire fort has the capacity of storing around 2,376,000 gallons of water. 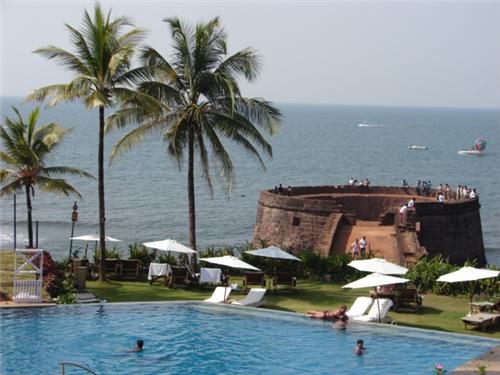 It is one of the most important and crucial forts of Goa. The lighthouse inside the fort used to emit light once in every seven minutes, which was later, changed to every 30 seconds. However, the concept was completely abandoned in 1976. Located about 18 kilometers from Panaji, the fort currently houses the Central Jail. Since it is an important tourist spot, many tour buses often stop here. However, one can also hire a taxi or a bike to reach here.

Constructed by Adil Shah of Bijapur, this fort is built along the Chapora River. The current fort was re-built by the Portuguese, when the Marathas withdrew their rule in 1717. The new fort was built in such a way that it consisted of many underground tunnels, which would serve as safe way passages in case of emergencies. However, in 1739, the Marathas regained the control of fort but in 1741, the fort was again handed back to the Portuguese when the northern part of Pernem came under their control. 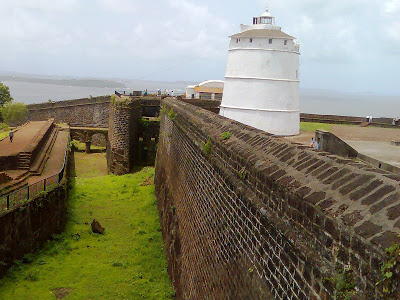 Even though the fort is in ruins now, it still provides breathtaking views of the Vagator beach and Arabian Sea. To reach here, one can easily hire a taxi or an auto from Mapusa or Panaji. Alternatively, one can even take the daily buses that run between Panaji and Chapora Fort.

Constructed in 1624, this fort was built with a purpose of protecting the Portuguese from the consecutive attacks of the Marathas. The fort consists of rich historical importance as there is invaluable ancient information embedded on the walls of the fort. Covering an area of almost ten kilometers, the fort earlier consisted of a towering bulwark, five prisons, chapel, three magazines and accommodation for the guard. However, besides the chapel and the boundary wall, not much is left of the fort. 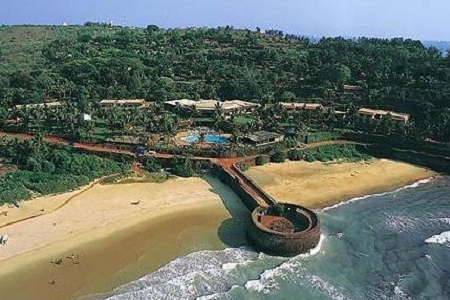 Rich in legacy, Mormugao Fort is known for its tough walls and has survived many battles in the past. If you are interested in learning the history of Goa, then this is the place to be. Located about 32 kilometers from Panaji, this fort is situated in the Vasco De Gama town with daily buses running from both cities.

Located at the northern most part of Goa across the mighty Tiracol River, Fort Tiracol or Terecol is situated right next to the Keri Beach. The fort was constructed in the seventeenth century, however it officially became a part of Goa in 1788. In 1825, the fort became a military base for Dr. Bernado Peres Da Silva to aid an attack on the Portuguese. However, his attempts were unsuccessful and the Portuguese regained the fort but it was abandoned once they left. Fort Tiracol is one of the most captivating forts in Goa and is definitely worth a visit. 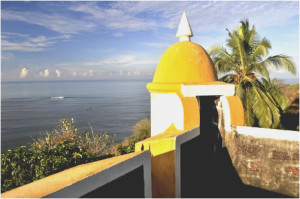 The fort also consists of a church called St. Anthony Church, which is not open to the public. However, during the annual feast during the month of May, the church may be open to the public. Even though most of the fort is in ruins now, a part of the fort has been converted into a Heritage Hotel. To reach the fort, one has to cross the Tiracol River, which takes about a short 30 minutes ferry ride. From there, you can either walk or hire an auto to the fort.

Another popular fort in Goa, Cabo De Rama Fort can be visited in Canacona. A mythical story attached to this fort that goes back to the ancient times, it is visited by many tourists every year. It is believed that Lord Rama took shelter here with Sita, when they were banished from the Kingdom for a 14-year exile - another famous reason why it is called Cape Rama. The fort was conquered by many local and foreign rulers over the years. In 1763, the fort was occupied by the Portuguese after a viscous battle with the Hindus. However, the fort was abandoned when the Portuguese left the place.

Even though the fort is in ruins now, it is still a famous tourist attraction. A small chapel inside the fort adds to the charm of this place. The fort provides great scenic views of the ocean from the western side and is the perfect place if you just want to relax and spend some time by yourself. The fort can be easily reached by hiring either a taxi or cab from South Goa. Alternatively, many buses run from Margao to Cabo De Rama daily.
7747